TL;DR - Assigning a function to closure property creates a strong reference to the owner of the function potentially creating a retain cycle

Swift has first class functions, meaning that a function is treated like any other object, i.e. it’s possible to:

I have found one caveat related to this. Let’s say you have a view that has a closure property that gets called when a button is pressed.

This View is owned by a ViewController and it handles the button being pressed by assigning it’s handleButtonAction function to the onButtonPressed closure property of the View.

Since Swift allows for functions to be assigned to closures I thought that customView.onButtonPressed = handleButtonAction was an elegant way of linking the implementation of the handler, defined in it’s own function, to the button action. However, this seemingly harmless code will create a retain cycle. Thanks to Xcode 8 memory debugger it’s easy to visualise this: 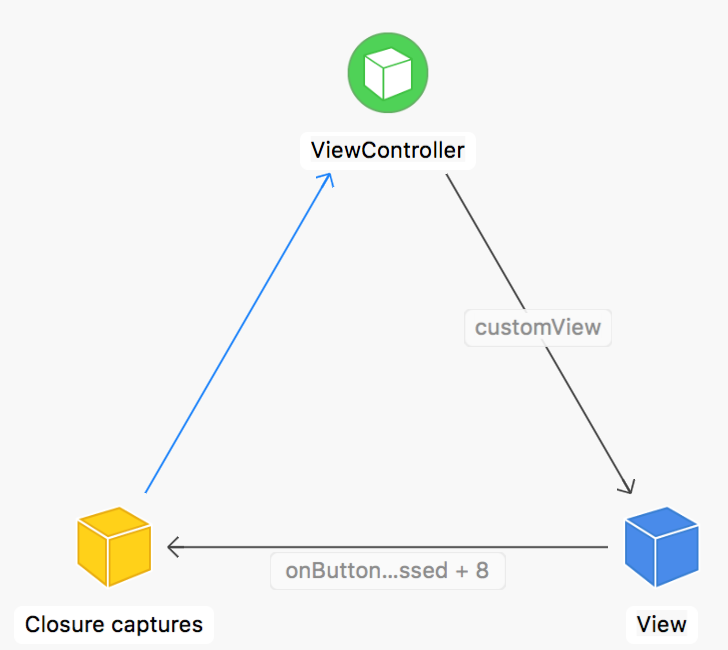 While finding a solution to break this cycle it’s good to have a unit test that proves this. The following test will fail if the ViewController has a retain cycle:

A solution to this problem can be to assign a new block that captures self weakly and call the function inside it using the weak self:

In this case we can go for unowned since the View will not exist beyond the lifecycle of the ViewController:

This solution is certainly less elegant than the original direct assignment. This is why it’s so easy to forget that assigning a function retains the owner of that function potentially creating a retain cycle.

I’d like to thank Nahuel Marisi and Neil Horton for reviewing this article.