TL;DR - ReactiveCocoa 4 is a reactive functional programming framework: Streams of events (such as button clicks or data from the network) called signals, are manipulated using functional constructs like filter, map, reduce, and so on. The whole idea is to react to events (instead of doing polling for example) and reduce state as much as possible.

What is the purpose of this article?

This blog post is the first in a series of articles about Functional Reactive Programming using ReactiveCocoa 4. The idea is to gradually introduce FRP and ReactiveCocoa, hopefully leading to its adoption by the readers. We won’t go through the installation of ReactiveCocoa, as this is well documentated on their website.

NB: If you’re only interested in ReactiveCocoa, you can skip this section.

The for loop modifies the original array, so in other words it has a side effect. If some other part of the program depended on values of this array, we could end up with some strange behaviour given that the value of the array are being changed without notice.

A functional way, using map has no side effects:

newArray is a copy, and therefore any other part of the code that depends on array will suffer no side effects. This very simple example illustrates the advantages of using functional constructs. FRP is all about applying these constructs to stream of events (called signals).

The following section will describe in detail the main building blocks of FRP using the ReactiveCocoa framework.

Events are the fundamental building blocks of ReactiveCocoa. An event is emitted by an action such as a button being clicked, data from the network and so on. There are four types of events:

A Next event is usually emitted when something has happened (such as a button click). This type of event can carry a payload with it, which can be any object, or it can also carry no payload so the type of event would be void. For example, if a button is pressed we might only care about that fact, so there would be no payload. However, if the event is the next value of a UITextField, the payload might be the String value of the text.

When a source will not send any more data (for example, a file download is complete) a Completed event can be sent. This will be the last event sent as the signal from the source will be disposed of after this (see Disposing signal further down for more details).

If an error occurs (such as not being able to contact the server), we can represent this with an Error event. The event contains an error (usually of type NSError) with the information of why the failure occurred. This type of even will also dispose of the signal and therefore no further events will be sent.

This is not a very common type of event, but it can be used to represent an interruption (such as the user cancelling a download) in a stream of events. It carries no information. As Failed and Completed do, interrupted also disposes of the signal, meaning that no further events should be expected.

A signal is a stream of events. Over time, a signal will emit various Next events, followed by a Completed event if there were no errors. You can think of a signal as an array of events, except that we have no list of historical values.

To illustrate the various ways of manipulating signals, I’ve built a demo application that you can retrieve from github. 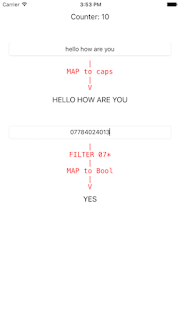 This example installs ReactiveCocoa via cocoapods, but I’ve included the Pods/ directory so you only need to open the workspace to build the project.

As you can see from the screenshot, the example has:

We are going to go through how all of this works in detail below:

The main Signal constructor is the following:

So we can create Signal a signal by passing a closure that takes an object of type Observer and returns a Disposable (more on disposing below). The signal will forward any events send to this Observer to all of its subscribers. If it all seems clear as mud, let’s illustrate this with the signal for a counter in the example above:

NB: The schedule: method is provided by an extension so we can simplify the code example by avoiding the use of selectors. The same could have been achieved without it of course.

Our timerSignal will emit events of type String and will return no errors. Every time our timer fires (that is every second), we send a new String event with the updated count. Now, once this signal is created by invoking the timerSignal() method, it will begin emiting next events irrespective of whether anybody is listening to them or not.

We’ve just created our very lovely signal, so we want to know (that is observe) events that come out of it so we can do something about it:

We’re going to observe Next events (remember they’re of type String) and every time we get a new one, we’ll update out countLabel text. If you run the demo application, you will see the label changing every second with the updated count. Voila!

So far, we’ve discussed the Reactive part of FRP. User interaction, networking, timers and so on produce streams of events called signals. We can observe this signals if we’re interested in their values. We react to events, because we don’t know when they will be happening. The great advantage, is that it’s easier for us to avoid polling and have different components of the app work asynchronously of each other. As iOS developers, we’re already used to this kind of pattern because we use it with NSNotificationCenter. One part of the app may emit a notification (in effect, an event) and another will listen to notifications if relevant. It’s exactly the same concept.

The real power of FRP is its combination with functional programming. Unlike a notification, a signal can be combined with other signals; it can be filtered (like an array); it can be throttled, delayed, mapped, flat-mapped, events can be skipped, values can be transformed into other signals, and so on. Most of these transformations have no side-effects, meaning that the original values are not altered. This is great because we can significantly reduce state, and consequently bugs.

Applying map to a signal works exactly the same way as it does for arrays: We get a new signal of whatever type map has returned. Every time the original signal emits an event, it gets transformed by map. Let’s take a look at our example, where we convert lower case text typed by the user into uppercase.

NB: A SignalProducer is a type of signal that doesn’t emit events until it’s started. We will discuss this further in part two, for now just imagine its the same as a Signal.

map converts our lowercase values into uppercase, so when we listen to the transformed signal we get all uppercase text.

We can use filter to make sure that certain types of events that fulfill a predicate go through. A new signal is created which emits only events that match that filter. In our example, we’re using filter to make sure that the text that starts with 07 (a UK phone number) go through. We then use map to convert the String event into a Boolvalue of true.

We can then start observing the signal:

We now start seeing the real power of FRP, given how easy we’ve combined filter and map to produce only Bool values that we’re interested in.

As a test, we can throttle the signal from the lowercase textfield, so the conversion to uppercase doesn’t happen immediately:

It’s incredibly simple, just adding a call to throttle is all it takes (it’s possible to even specify on what thread the scheduling should run).

As a point of comparison, it’s worth thinking about how this would be implemented without FRP. At a minimum, we would need a timer and some shared state to check if we’re allowed to update the textfield or not. Here’s a very simple implementation just so you can see how much more code we need:

You can see how much more combersone it is: we end up with various expose public functions (required for selectors to work), access to the Objective-C runtime and the need for shared state which is bug-prone.

Signals are retained by their observers, so even if you don’t retain them, they will be kept in memory so long as their observer is alive. There are therefore various ways of disposing of a signal:

This is a nice way of disposing of a signal, if no more data will be sent. We simply send a Completed event and the signal will be diposed of. For example, our timer signal could be ended when the count reaches 10:

2. We can use the takeUntil, takeWhile and take methods to end the based on a condition.

The easiest is the take method, which simply takes the number of events we wish to receive before the signal is ended. The takeWhile method takes a predicate, so when that condition is met the signal ends. Finally, the takeUntil method can be hooked to events of another signal, when we receive an next event from it, our signal will be terminated.

Our timer signal will be terminated when the number of characters in a String event is 5 or above.

The timer signal will be terminated after 10 events are received.

Our lowerToUpper signal will be terminated when the ViewController is dealloc’d as that’s when the WillDeallocSignalProducer will emit a Next event.

3. Use the returned disposable, and call the dispose() method.

This is the least recommended method, and it’s usually only used when a request is cancelled by the user for example. However, it’s a lot cleaner to use takeWhile with a signal that’s connected to say a cancel button.

Hopefully, this introduction has given you a basic understanding of FRP and of ReactiveCocoa in particular. Do download the example, and play around with it so you can familiarise yourself with the various concepts discussed here.